Propane is a hydrocarbon (C3H8) and is sometimes referred to as liquefied petroleum gas, LP-gas, or LPG. Propane is produced from both natural gas processing and crude oil refining, in roughly equal amounts from each source.  Nearly 97% of propane consumed in the United States is produced in North America. It is nontoxic, colorless, and virtually odorless. As with natural gas, an identifying odor is added so the gas can be readily detected.

Tests conducted by the U.S. Environmental Protection Agency show that propane-fueled vehicles produce 30% to 90% less carbon monoxide and about 50 percent fewer toxins and other smog-producing emissions than gasoline engines. Propane also is nontoxic, so it’s not harmful to soil or water. The biggest emissions benefit of LPG shows up in the results for total potency weighted toxins (including benzene, 1,3-butadiene, formaldehyde, and acetaldehyde). Potency-weighted toxic emissions for the LPG test were 98% lower than those from the gasoline test.

For more information on the calculation of potency weighted toxic emissions, see the section on emissions by clicking here.

How many vehicles run on LPG?

Is LPG cleaner than gasoline?

How about power loss?

You will typically notice very little if any power loss on LPG; some users report a power gain.

Will LPG or CNG hurt my engine?

NO! In fact being on the light end of the hydrocarbon scale, there is almost no carbon in these fuels. Carbon is what turns your engine oil black! One big benefit of LPG and CNG is your oil will stay cleaner and require  less frequent changes, saving you  time, money, oil and oil filters! LPG and CNG go into your engine as a vapor. There is no “raw” fuel entering the cylinders which washes the lubricating oil off the cylinder walls. So the piston rings stay better lubricated, resulting in many LPG and LNG fueled engines lasting up to THREE TIMES LONGER than the same engine on gasoline! LPG and CNG should cause no problems with valves in any engine designed to run on unleaded fuel. You can burn a valve or damage a valve seat just as easily on a poorly set up gasoline engine as with a poorly set up LPG or CNG system.

Are LPG and CNG harmful to the environment?

NO. As approved, alternative clean fuels listed in the Clean Air Act and the National Energy Policy, LPG and CNG are some of the cleanest burning of all alternative fuels. LPG is is non-toxic and is not harmful to soil or water. Tests conducted by the U.S. Environmental Agency show that LPG and CNG vehicles produce 30-90% less carbon monoxide than gasoline engines and about 50% fewer toxins and other smog producing emissions. Have you ever wondered why almost all indoor-use equipment from forklifts to the Zambonis’ at your local ice rink run on LPG indoors? Now you know why.

Typically in fleet applications, propane costs less than gasoline and offers a comparable driving range to conventional fuel. Although it has a higher octane rating than gasoline rating (104 to 112 compared with 87 to 92 for conventional gasoline), and potentially more horsepower.

Lifecycle GHG Emissions and Petroleum Use

Unlike natural gas, propane is not a greenhouse gas (GHG) when released directly into the atmosphere. When considering the entire lifecycle of propane used in converted LDVs, ANL found that propane reduced GHG emissions by 21% to 24% and petroleum use by 98% to 99%.(The Propane Education and Research Council). 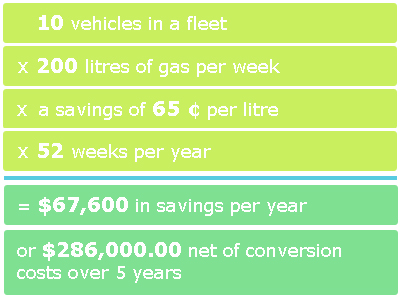